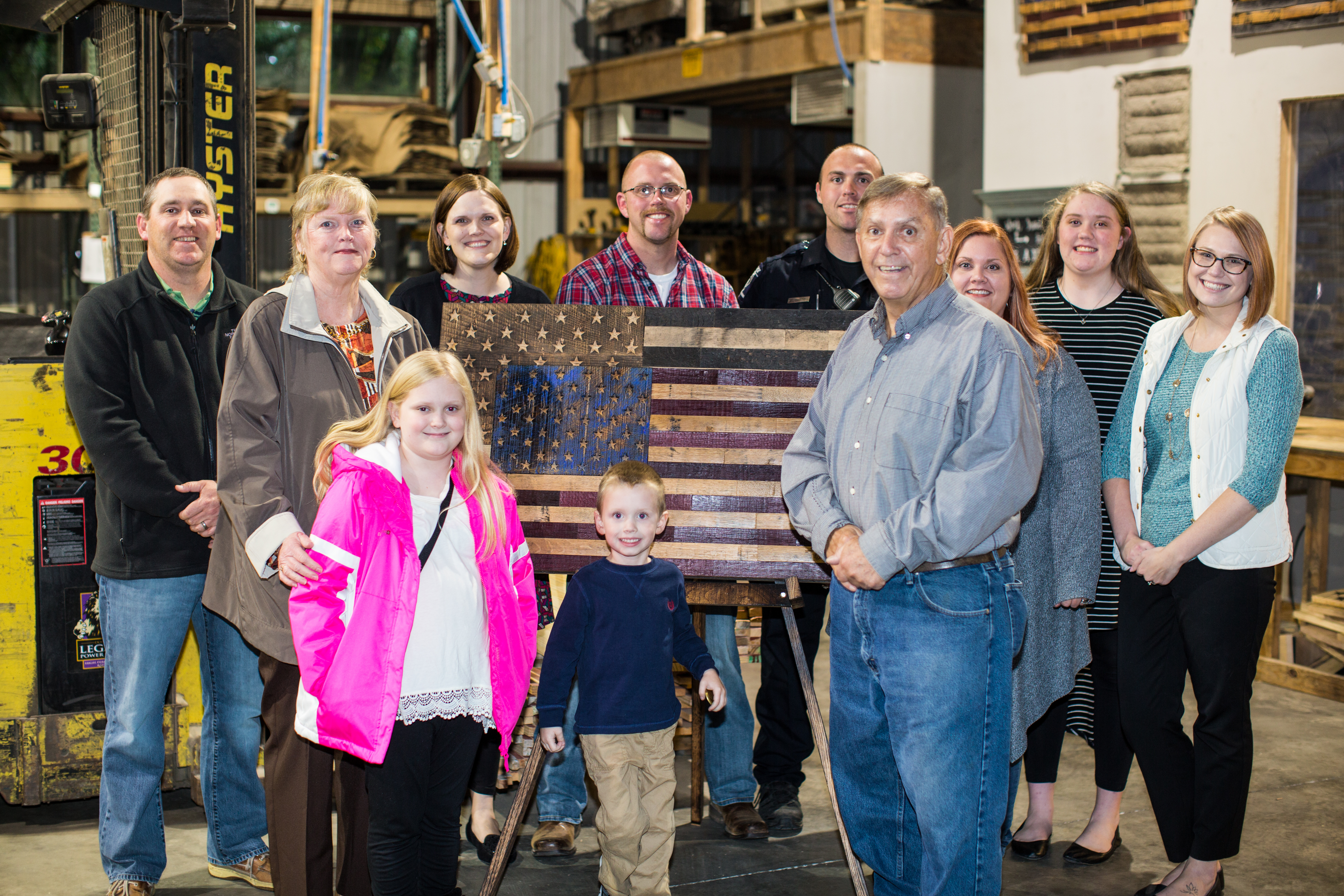 For the past 99 years, November 11th has been a day of honor and remembrance for the brave who have and are defending our great flag. Of course, this hits close to home with us here at The Heritage Flag Company®, where we spend our days handcrafting the stars and stripes. In fact, the very first Heritage Flag was a Veterans Day “thank you” gift three years ago. Since then, we are still saying thank you to the individuals that inspire, sacrifice, and protect for our grand nation.

This Veterans Day, we had the privilege of honoring a local hero and Purple Heart recipient. George Dawkins, the only child of a country farmer, grew up right down the road here in North Carolina. At age 19, George was drafted into the US Army. Upon completing basic training, he was shipped off to serve as part of the 198th Infantry Division in the Vietnam War.

One evening George was out on patrol with his unit as the platoon radio man, when they were suddenly ambushed. He suffered gunshot wounds to both his head and neck. As choppers arrived to collect the fallen soldiers, George was loaded up among them and assumed to be dead- but that was not the case.

Fortunately, George survived his injuries but came back home to North Carolina a different man. Suffering memory loss and unaware of who he was or even his parents, George had to re-learn everything he once knew so well.

To this day George continues to live with plates in his cranium, scars along his head and neck, and fragments of a bullet lodged in his brain. His right arm has been permanently paralyzed. Determined to make the most of his situation, George was resilient and resolved to work around his condition. He grew up to raise three children with his wife Sandy of 43 years. With one hand, he taught them all how to swim, ride a bike, and tie their shoes.

Today at our shop, surrounded by his family, we presented George Dawkins with a Heritage Flag. We can’t comprehend the sacrifices he has made for us and our country, but we can thank him the best way know how. This Veterans Day, let’s all unite in thanking the service men and women in our lives for their patriotism and willingness give their all. 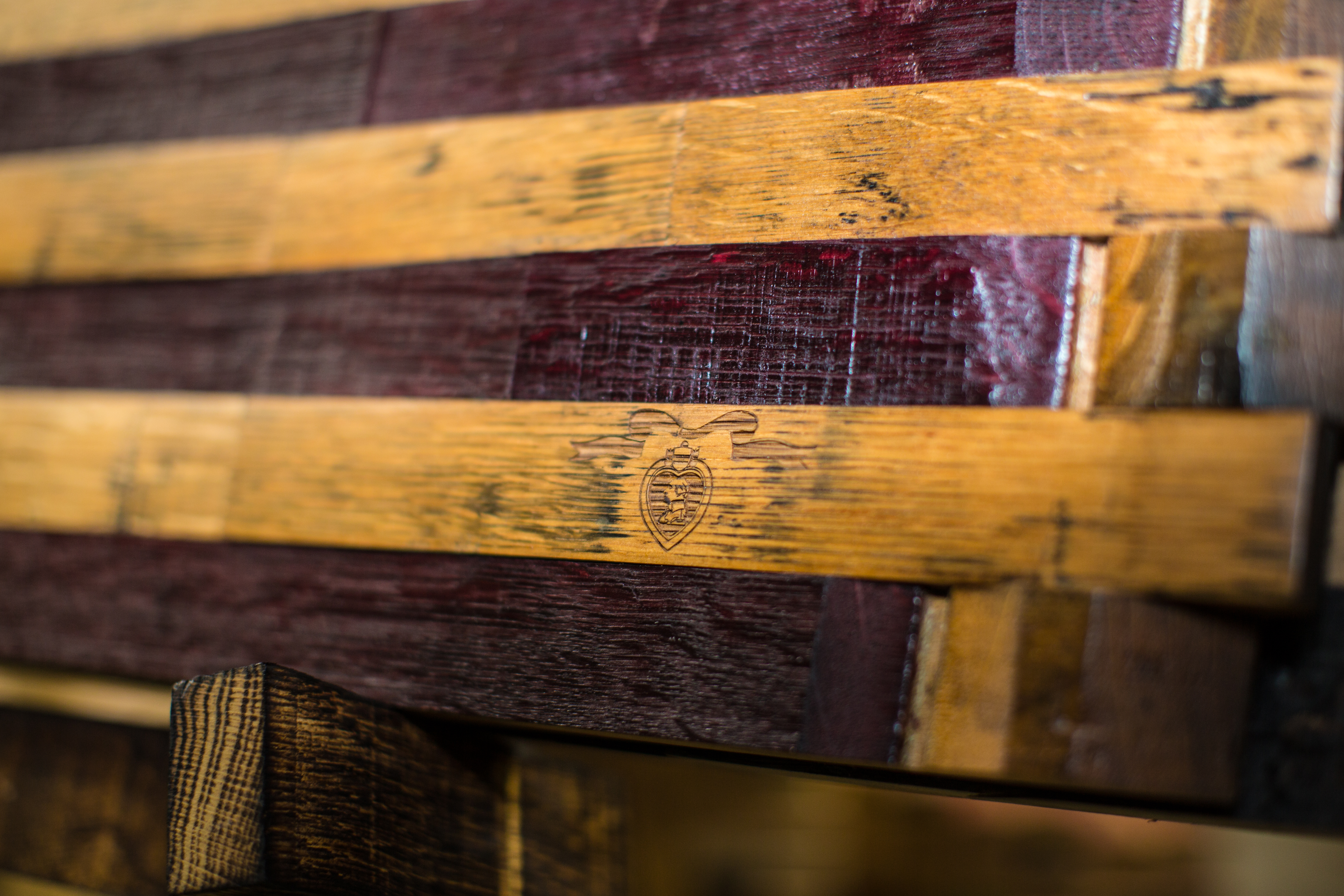 Every Heritage Flag we craft has to have a story. A story of something special, original and meaningful- truly unique and one-of-a-kind. “Our products will never be made from materials that can be bought off the shelf,” says owner Heath Trigg. We’re proud to introduce The Homegrown Series of Heritage Flags, which continues our tradition of telling stories through [...]

Bad a$$! The 1st Annual Heritage Block Party this weekend was incredible! Whew. What a success!Thank you to all our amazing customers, friends and family who joined the 2,000ish people in attendance.The food trucks were awesome and ALL sold out of food. Southern Pines Brewery went through 10 kegs- yeah y’all were feeling good and [...]

The first Labor Day was celebrated on September 2, 1882 to commemorate the social and economic achievements of American workers. Since then, our mindset has shifted to shiny new appliance sales and the last day a true Southern girl can wear her whites and seersuckers. But this Labor Day, we have an opportunity to spread the word that American [...]

The Flag Makes Our State!

We are very excied that The Heritage Flag Company is featured on the July cover of Our State Magazine! We enjoyed working with them and they did a wonderful job capturing the uniqueness of both our story and our flag. Pick up your copy on shelf or click here to view the digital version. About Our State:Each month, [...]

Introducing The Heritage Flag Flask, created through our recent collaboration with Jacob Bromwell, one of the oldest companies in America. Heirlooms are priceless items that have belonged to a family for generations and every Heritage Flag is intended to be just that. We’re excited to add this limited edition Flask to our Collectibles—hand built from pure, [...]

What is Heritage Craftsmanship?

Almost everyday customers ask us about the secret to creating a perfectly imperfect Heritage Flag. Steeped in tradition and careful craftsmanship, the process of creating a Heritage Flag takes time. The journey begins years before our craftsmen dismantle the first barrel in our Southern Pines, NC workshop.  Bourbon, whiskey, and wine are aged for upwards of 10 years [...]

One year ago today on Veteran’s Day, we offered the very first Heritage Flag for sale. We had no idea where this dream would take us. The first Heritage Flag was created as a gift for 3 veterans chasing their American Dream. Ever since we have been creating one-of-a-kind flags in tribute to the amazing men and women that [...]